What is Earned Value Management?

If you are someone who has worked on projects, but are new to project management, you would be forgiven for thinking that project management is all about bringing a project home on schedule. In certain organizations, milestone dates are sacrosanct and the management team seems willing to do anything and everything to make sure their projects meet these milestones.

But you might start looking more closely at project management, maybe because you are thinking of getting project management certification. Then you should encounter the Guide to the Project Management Body of Knowledge (PMBOK® Guide), where, you might be surprised to learn of the “Triple Constraint” concept, where scope, cost and quality must also be managed. Given that there are ten knowledge areas covered in the PMBOK® Guide, you might begin wondering why there is such an obsession with schedule.

As an example, suppose you are given a task to achieve in a week. You will start first thing on Monday and it must be done by close-of-business on Friday. Now years of project management research suggest that a person is doing well if they can devote thirty hours per week to project work. So this task should equate to thirty hours worth of your time. However, suppose we do some investigation at the end of the week. We might find that you delivered on schedule, but you actually put the full forty hours into the project this week. Also, because of issues with the task, you had to spend an hour every day working with the senior engineer to resolve problems. In other words, a task that was budgeted to take thirty hours actually took forty-five hours (with five of those hours being more expensive ones – senior engineer time). If schedule is the only consideration, this task was successfully delivered on time, but if budget is considered, the initial estimate was out by 50%!

This may sound like an academic distinction, but it can have knock-on effects down the road. If you ever become a Project Management Professional (PMP)® yourself sometime down the line, you will be aware of the importance of managing the project team. If these people have to work crazy hours to meet unrealistic schedules, then this fact must be highlighted, so that future projects will benefit from more accurate estimates. Unfortunately, many organizations prefer not to address the issue of unrealistic estimates, with the long-term effect of high staff turnover and, ultimately, poor quality work.

So how can you, when you become a project manager yourself, highlight this problem? Well a technique exists that does just that. Called Earned Value Analysis or Earned Value Management, it is very simple to use, as it is based on only three measures.

The first thing you have to do is to decide what work needs to be done. In other words, establish the scope of the project. If you do decide to sit the PMP® exam, you will become well versed in Work Breakdown Structures which encapsulate the project’s scope. This structure will be further broken down into work activities that need to be scheduled. Each of these activities must be estimated and scheduled at the appropriate point in the project. This estimate is called the “Planned Value” in Earned Value Management. So, in our earlier example, the “Planned Value” was thirty hours.

The other two Earned Value metrics do not come into being until we actually commence work on the project. Suppose our example thirty-hour task was the only activity planned for that particular week. Once the task is complete, we can say we “Earned” thirty-hours for our project. This “Earned Value” shows how well we are tracking to schedule. We planned thirty hours’ worth of work; we earned thirty hours’ worth of work, so we are bang on schedule.

The difference between the actual Earned Value and the Planned Value is called the “Schedule Variance” and is calculated using the simple equation: SV = EV – PV. So a zero or positive Schedule Variance shows we are on or ahead of schedule.

Now the interesting comparison is between the Earned Value and the Actual Cost. This is called the “Cost Variance” and is expressed as: CV = EV – AC. As you can see clearly, in our example, the Cost Variance is seriously negative (CV = 30 – 45), so we are over budget.

Senior managers prefer these figures expressed as fractions. So the people who came up with Earned Value Management provide these formats, calling them indices. Thus we have the Schedule Performance Index which is given as: SPI = EV / PV and the Cost Performance Index is: CPI = EV / AC. We want both of these figures to be greater than or equal to 1.

These three figures can be cumulated and presented graphically, giving a clear picture of the project’s health. 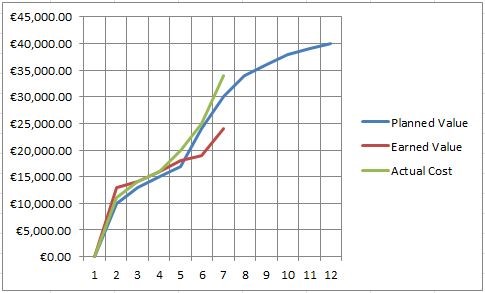 In this example, we are at week 7 of a planned 12 week project. You will see that the Planned Value is plotted for the entire project. That makes sense, because we have identified all the activities and estimated their durations. This is what we should achieve at the end.

However, while we seem to be tracking reasonably close to the plan, our Earned Value is less than the Planned Value, which means we are behind schedule (SPI = EV / PV). Also, the Actual Cost is higher than the Earned Value, so we are over budget as well (CPI = EV / AC).

Keeping track of these three figures shows a clear picture of your project’s health. Recording the Cost and Schedule Performance Indices will provide the hard numbers to support the illustration.

While there is a lot more to Earned Value Management than this, if you understand these concepts, you already have a powerful technique to track your projects and evaluate your estimates.

Earned Value Management is covered in detail in PMP® exam preparation classes. It is a vital component of the Project Cost Management knowledge area. Please check out our PMP® course offerings or contact us to discuss your particular PMP® training needs.